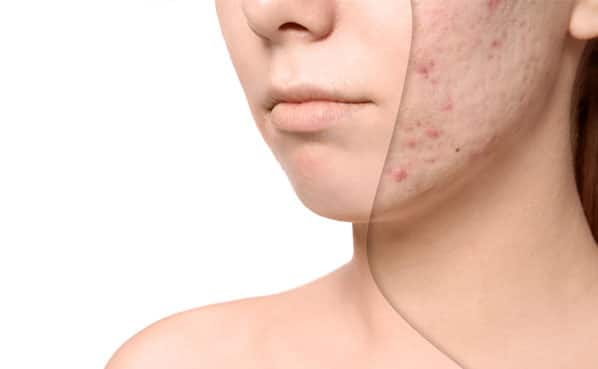 If you made it through your teens without a breakout, consider yourself something of a unicorn. Acne, a skin disorder that primarily affects the face, shoulders, chest and back, plagues an estimated 80 percent of people between ages 11 and 30 at some point.

Fueled by fluctuating hormones that increase oil production (sometimes further aggravated by a teen’s desperate attempts to make it all stop), breakouts happen when that oil (also known as sebum) combines with dead skin cells, trapping bacteria, causing inflammation and clogging pores. To keep the skin from getting dry, the skin makes oil in little wells called “sebaceous glands” that are found in the deeper layers of the skin. “Whiteheads” or “blackheads” are clogged sebaceous glands. Blackheads are not caused by dirt blocking the pores, but rather by oxidation (a chemical reaction that occurs when the oil reacts with oxygen in the air). People with acne have glands that make more oil and are more easily plugged, causing the glands to swell.

Doctors say there’s no standard age or period of time when this “oil surge” of sebum calms down. Some people never get it, for others, it lasts 5 years. Your acne might not end with your teenage years — studies have shown as many as 22 percent of adult women suffer from acne at one time or another. What’s more, acne can take a toll on a teen’s already delicate sense of confidence. The psychological effects of acne can be profound, and persons with acne are at risk for substantial, negative effects on quality of life, similar to those seen in persons with asthma, epilepsy or arthritis. Adolescents and adults with acne have higher rates of anxiety, low self-worth and depression than those without acne.

Best teen acne scar treatment
There are generally two means by which to treat teen acne and pimples: washing your face preemptively with appropriate cleansers and spot treating breakouts when they arise.

Wash your face twice a day with a gentle (no soap!) cleanser
Always wash your face daily, and twice a day if your skin is oily or gets dirty throughout the day. Be sure to remove all makeup before bed, and try to cleanse your face after working out.
Acne-sufferers should look for non-comedogenic products because they won’t block pores.

Pimples? Spot treat them
Doctors recommend spot treating pimples, from the second they’re coming on until they’re just about all gone, preferably with a product containing a retinoid, benzoyl peroxide or salicylic acid. For those who are allergic to benzoyl peroxide, doctors recommend formulas containing salicylic acid to fight acne and calamine to calm irritated skin.

What makes teen acne worse?
Washing your face too often: believe it or not, over-washing can leave teen skin susceptible to more breakouts. One of the mistakes commonly seen with teens is they really want to get their skin better, and so they over-dry their skin however dry skin can actually make breakouts worse.
Piling on the trendy products: teens tend to turn to their favorite YouTuber or influencer and start putting too many products on their face, and it can stoke the fire. Acne breakouts can take 5-7 days to calm down and disappear, so it’s important to stick to a basic routine and give it time.
Over scrubbing or exfoliating: teenage skin already sloughs off dead skin cells on its own so it is not recommended to use apricot scrubs or scrubs containing beads, because these products can be abrasive and irritating. Scrubbing is also a big no-no. Sometimes, teens think acne is from dirt and they start to scrub it, but scrubbing is bad and over washing the face is bad. It is recommended that teens use a gentle exfoliant once a week, in the form of glycolic pads.
Don’t pop pimples: though it isn’t the absolute worst thing a teen can do (if the pimple has come to a head), doctors warn against popping pimples — spot treating them is more effective. Picking and popping pimples can lead to scarring, because you increase inflammation. Once in a while a doctor will do it, and some people feel a compulsion to pick and pop, but it’s something that is discouraged.

When to see a doctor for acne scar treatment
If breakouts leave scars or don’t respond to a regular routine of gentle cleansing, exfoliation and spot treatment, a consultation with a skin doctor might be in order. Some people need something stronger to manage their acne, like an oral antibiotic. Teens shouldn’t get discouraged. Though acne can be really annoying, 99.9% cases are curable.

PrevPreviousHow can I get rid of my acne scars?
NextAnti-Wrinkle Injections: Effective treatment for excessive sweating or ‘hyperhidrosis’Next