Anti-Wrinkle Injections: What are anti-wrinkle injections and what are they used for? 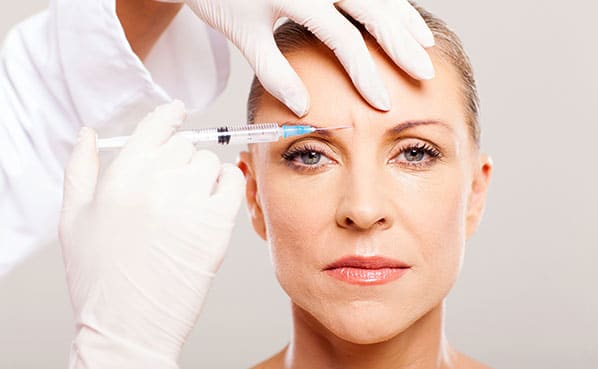 Anti-wrinkle injections are made of a natural, purified protein and neurotoxin produced by the bacterium Clostridium botulinum. The injections work by relaxing certain wrinkle-causing muscles to produce a younger and fresher appearance. They inhibit the transmission of neurotransmitters from nerve to muscle and stop the muscle from contracting and forming a wrinkle.

As your skin matures, the effects from frowning, squinting and the movement of our muscles from facial expressions cause folds and creases to form. With age, our skin naturally becomes less elastic, causing these lines to stay permanently on our face, whether contracting these muscles or not.

Anti-wrinkle injections are a quick and simple, non-surgical solution to facial wrinkles and fine lines. The injections weaken facial muscles causing them to relax, resulting in a smoother, fresher appearance. They are most commonly used to give a fresher appearance to the crows feet, forehead and frown, but can also improve the appearance of fine lines and wrinkles to the lower face, e.g. smokers lines, neck bands and around the mouth. Other uses for anti-wrinkle injections include the treatment of excessive sweating (also known as hyperhidrosis), especially to the palms and underarms, treatment for teeth grinding, slimming of the jaw line and relief from chronic migraines.

Anti-wrinkle injections do not replace lost volume, in other words, they do not plump or re-volumise the skin. To plump or revolumise the skin, dermal fillers are an effective treatment. Dermal fillers are often confused with anti-wrinkle injections, but best anti-ageing results are achieved when the two treatments are used in conjunction with each other.

The history behind anti-wrinkle injections

Dr Richard Clark, a plastic surgeon from California, was the first to document a cosmetic use for botulinum toxin. He treated forehead asymmetry caused by left sided forehead nerve paralysis that occurred during a cosmetic facelift. Since the injured nerve could possibly regenerate by 24 months, a two-year waiting period was necessary before definitive surgical treatment could be done. Dr Clark realized that botulinum toxin, which had been previously used only for cross eyed babies and facial tics, could also be injected to smooth the wrinkles of the right forehead to match her paralyzed left. He received FDA approval for this cosmetic application of the toxin and successfully treated the person and published the case study in 1989.

Shortly after, Vancouver ophthalmologist Dr Jean Carruthers and her husband, Dr Alastair Carruthers, a dermatologist, observed that blepharospasm (eye spasm) patients who received injections around the eyes and upper face also enjoyed diminished facial glabellar lines (“frown lines” between the eyebrows), thereby initiating the highly-popular cosmetic use of the toxin.

In 2002, following clinical trials, the FDA approved Botox Cosmetic, botulinum A toxin to temporarily improve the appearance of moderate-to-severe glabellar lines. This led to the birth of anti-wrinkle injections as we know them today!

PrevPreviousAnti-Wrinkle Injections: Effective treatment for excessive sweating or ‘hyperhidrosis’
NextClatuu: Everything you need to know about ClatuuNext